Ima Hogg and the Texachron Monocycle 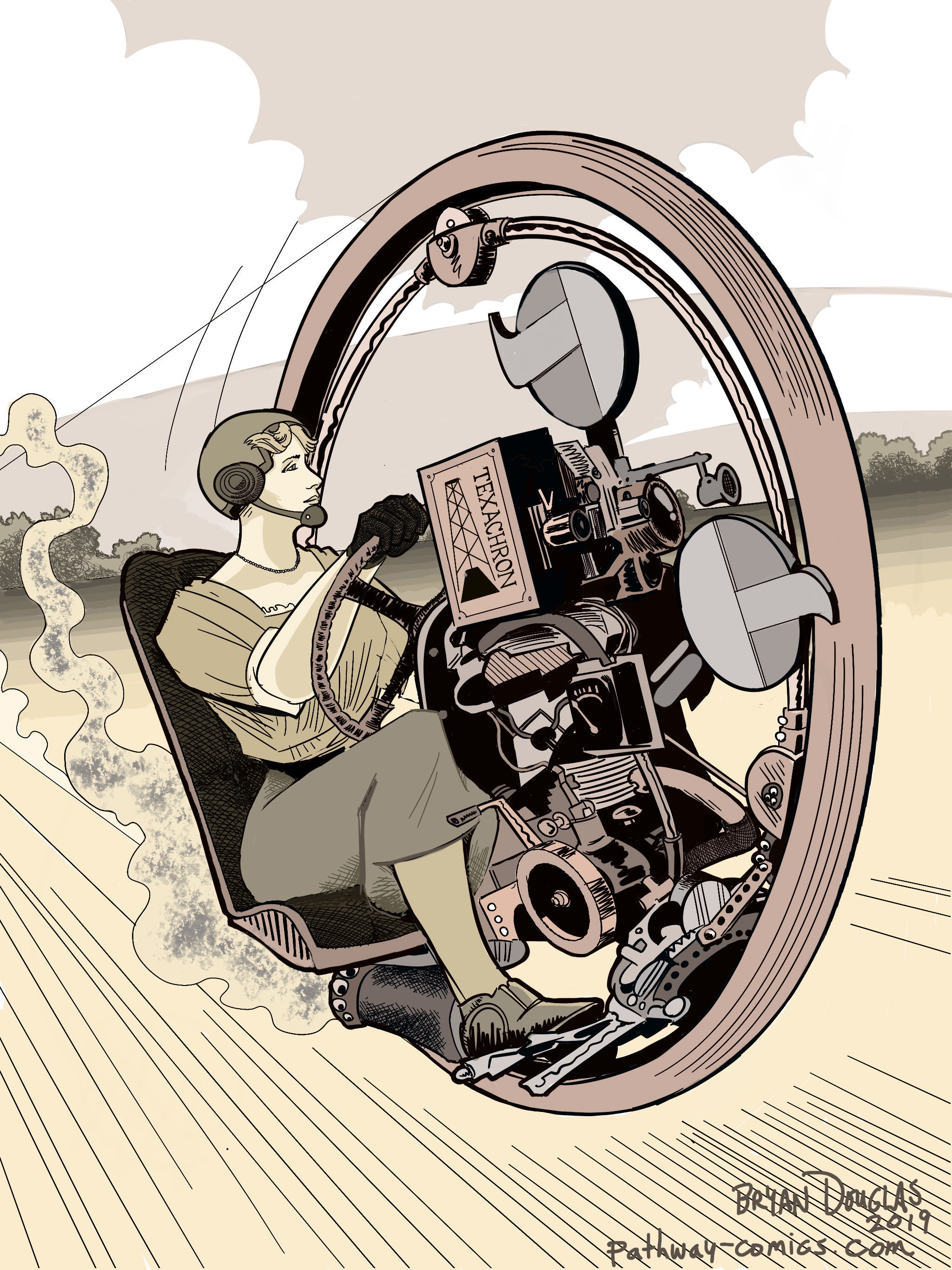 One of the things we like to do around here is look at figures from history and try to make note of aspects of their real lives that might translate into exciting superhero stories.  Texas philanthropist Ima Hogg is an example: One of her passions was the collecting of antique furniture. Surely there's not an exciting superhero story in THAT!

WHY did she collect old furniture? Just to have it? No, she was a true philanthropist (fabulously wealth thanks to the Spindetop oil strike), and she mainly seemed to concern herself with improving the lot of all Texans.  I think she collected furniture to show people a world lost in time. Her own life spanned the pre-automobile era, and stretched all the way into the 1970s. And I get the impression she enjoyed the trip, enjoyed seeing things change. ("That long hair is beautiful, young man," she was reported saying to a stranger near the end of her life.)

So how about with our super-version of Ima, she's a time traveler?

But not a regular one, zooming back and forth...  She gets around, but in an experimental monocycle, and only around physical territory. But she records the plights and triumphs of rural Texans (she was very concerned about isolated Texans suffering psychological complaints) and leaves these recording behind in a piece of furniture that can create hazy stereogram-animations (and wax cylinder recordings!) of decades-past events!

This is based, too, on a real-life event in which Ima was transporting her father, former governor of Texas Jim Hogg to give a speech in Dallas, only he got sick and couldn't make it past Fort Worth.  Ima hit the streets and procured RECORDING EQUIPMENT (in 1906!!!) and made recordings of her father's remarks, then GOT THEM TO DALLAS in time for his address.

I give you Ima Hogg: The mother of teleconferencing!

We're going to use her as kind of a Nick Fury-type figure, recruiting our girls into battle whenever something get screwy with Texas and Time. But the Sons of Shem (the Pathway Universe version of a certain famous secret society of racists) are always trying to wrest control of her time device away, and get help from racists in the 21st Century!

Hey, comics are supposed to be escapist fantasy...  But for me, a good escapist fantasy doesn't ignore problems, it tries (in some fashion) to DEAL with them...  And these particular problems are as desperate and real as can be!

See you next time, citizens!

Previous Post The SLOG: Now with more SLOG!
Next Post Caricatures and Science!
0 items in your cart