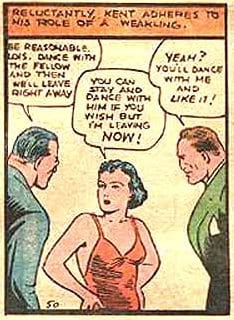 In honor of Superman's 80th anniversary this week, I wanted to talk about something I noticed on my most recent re-reading of his first published adventure: Clark Kent.

In most ways, Clark was already a familiar archtype, based on Sir Percy Blakeney, the cowardly-acting alter ego that delights audiences when he turns out to be a hero.

Sir Percy, and his heroic guise of the Scarlet Pimpernel, were created by Baroness Orczy  back in 1903, but she was tapping into much older storytelling traditions of powerful characters who hide their strength.

Here's an article about the origins of this character type, all the way back in ancient Greece!

But Clark Kent goes the extra mile. Clark Kent, as Jules Feiffer once wrote (in a piece which Quentin Tarantino borrowed from and put in the mouth of his philosophical assassin, Bill) is Superman's human disguise. So, it is Superman's commentary on how he thinks humans act. In a word, cowardly.

Looking at the above panel, from the very first appearance of Superman in Action Comics #1, in which Clark urges Lois to give in to a bully's demands for control over her body, I would say "cowardice" doesn't even cover it!!!

This looks to me like Seigel and Shuster were planning on using Superman's Kent identity to comment on mid-level villainy: Microagressions, we would call them today. Aiding and abetting the Patriarchy. Call it what you will, but these Golden Age Clark Kent scenes, before they became too challenging to present and Clark himself began to be presented as heroic, just not strong, really add an intriguing layer to the superheroic story.

I can think of a few examples where superhero writers utilized this idea... But only a few. Maybe it is just too fine a line to walk, month after month, story after story: Maybe the risk is too great that boorish or quasi-evil behavior from our superheroes' alter egos would just end up getting normalized!

Or maybe after a century of these stories, the halfway-evil behavior I'm talking about has ALREADY become SO normalized I can't even detect it when it's jumping off the pages in brightly-colored comic panels???