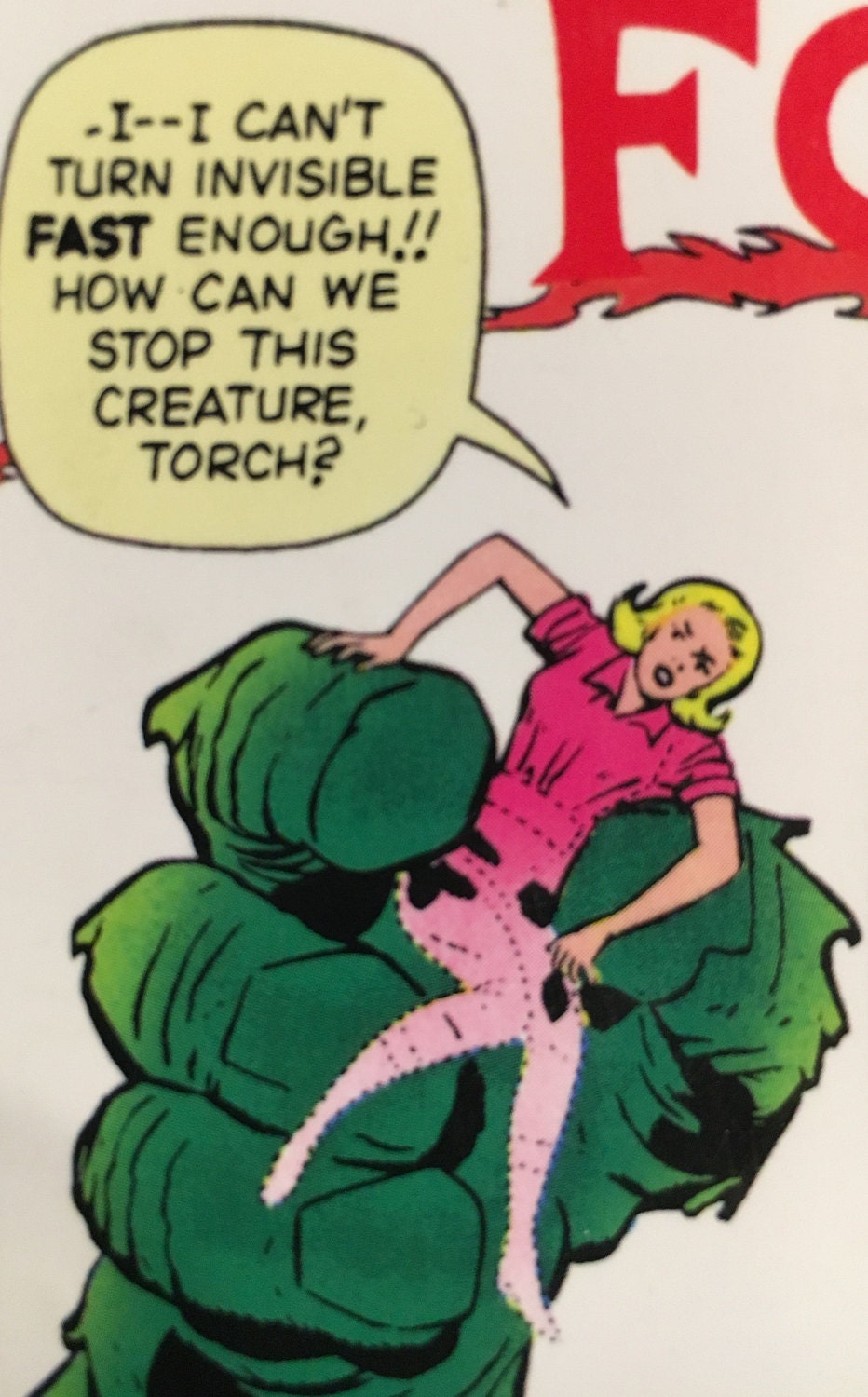 The "Modern Marvel Universe" officially dates back to the first issue of The Fantastic Four. The image shown here is the first bit of dialogue from the cover of that issue. Thus, the first words spoken in the Marvel Universe were of a solitary female character whining that she was not erasing herself with sufficient speed.

It did not go uphill from there.

Consider Stan's other early female characters: A woman who shrinks to the size of a wasp. Did I say characters? There was really just the other ONE.

Over time, a few crept in here and there. The Scarlet Witch (who seemed perpetually confused and frightened, with powers that were completely unpredictable) and Marvel Girl (about whom, in an early appearance, Professor X thinks: "You must never know I'm so protective of you because... I'M IN LOVE WITH YOU!")

You could say that Stan is wrestling with the PLIGHT of women through these characters. You could say that, but you could  read the stories for yourself, like I have. For me, having read them? I'm coming up short on excuses.

The crazy thing is that Stan himself clearly meant no harm. He was writing to a sexist audience in a sexist age: If he had produced, somehow, non-sexist superhero comics, many of his readers would have no doubt found them baffling.  I think there's every difference in the world between writing that is an unconscious product of its time and writing that is deliberately hurtful or WILLFUL in its sexism. And others (I can provide links if anyone's interested) have pointed out overarching elements of Stan's stories in which feminist arguments, of a sort, are being advanced... But whether these were deliberate on anyone's part, or merely emergent (unconsciously created over time) is very much up for debate.

All this is to say: I don't judge Stan himself very harshly. But his body of work, and the Universe built on it? Wonderful in many, many ways, and in their content and form they SPEAK to me in many ways...  But, at its core? There is misogynist rot there. At its core, and down to its deepest roots.

Many writers, in the years after Stan left for Hollywood, tried valiantly to address these issues: Englehart, Priest, Gerber, Stern, Claremont... but their messages of reconciliation were either always undermined by their own internal biases, some perhaps only subconscious, or overwhelmed by the built-in sexism in the overall tale.

And now we have reports that Marvel executives have concluded that diversity ITSELF has failed! There is simply not enough interest in female characters, they say.

Well, pardon my scoffs, gentlemen. But showing my all-girl superheroes to kids gets a huge reaction from girls AND boys. If the old myths can't change enough and grow enough (and if folks can walk out of an X-Men movie one day and vote to ban an entire religion from their country the next, the myth has clearly NOT grown enough) then it's time for some new myths.

And that's what we're all about here at Pathway Comics.