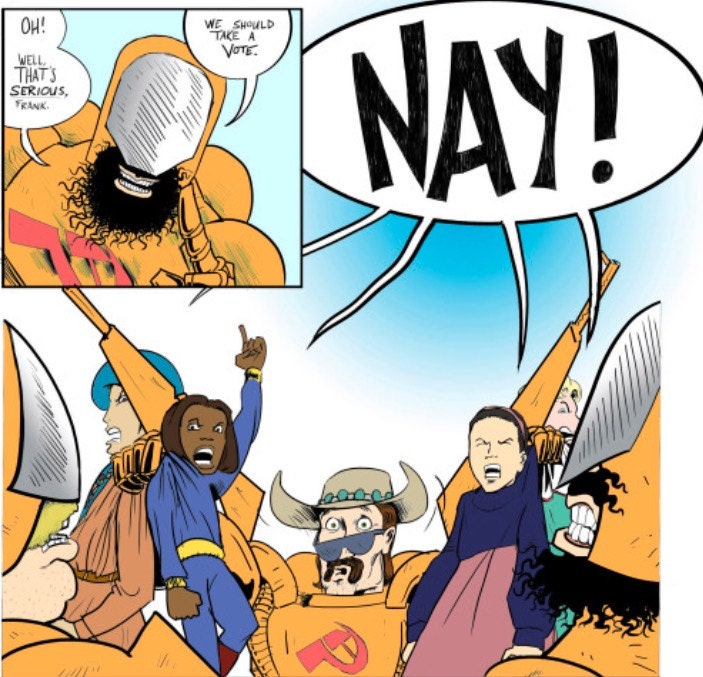 A year ago, when my wife and I were in the thick of hashing out the core concepts of the Dimensionals, our main concern was spinning a good, fun yarn.

I wanted fun bad guys, and since it seemed certain to me that Hillary Clinton would be in the White House in a Year's time, I thought, "Hey! Why not throw the right wingers a bone, here? Why not make the bad guys some kind of alternate-world communists? There have never been enough communist villains in fiction for my taste!"

The Agents of C.Z.A.R. that appear in The Dimensionals #1 are not Russians or Soviets. They're Austinites, alt-hippies... Cosmic Cowboys, as Jack Jackson would say... based very loosely on the Fabulous Furry Freak Brothers, but radicalized on their world's version of the Internet. They contacted C.Z.A.R., which operates distinct Cold War terror cells around the globe, and were provided with their battle suits and key elements of their Tower of Science assault plan by C.Z.A.R.Command.

All agents of C.Z.A.R. are dupes of the Kremlin, which never has to answer for C.Z.A.R.'s decentralized reign of terror. I wanted to reimagine the Cold War if Al Qaeda organizational structures were being used BY the Soviets, twenty years sooner.

Another weird tick I gave the C.Z.A.R. boys is that in every vote they hold (and they have them to settle any and all internal disputes) the minority opinion must be abided by. This is supposedly to respect the rights of the common man, but, as demonstrated in the story, can be used by individuals of bad faith to manipulate any outcome they want badly enough.

I could never, ever have expected, in early 2016, that a story about Russian dupes attempting to steal America's greatest positions of power, using the power of votes in which the one with the LEAST VOTES somehow WINS would have so much resonance, just one year later.

But that's comics for ya! One big adventure!